Bring back the Drach 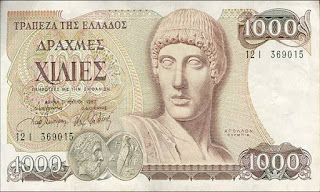 The BBC says: "The Greek PM has warned the nation of a collapse in living standards if MPs fail to pass an unpopular austerity bill demanded in return for a 130bn-euro ($170bn; £110bn) bailout."

What the BBC, the Greek PM, the EU, the IMF and everyone else with a vested interest in keeping the Euro alive fails to point out is that Greece will face all of the above if they do pass the austerity bill.

There will only ever be light at the end of the tunnel for Greece - and Portugal, Spain and Italy - is if they get out of the single currency and devalue against the Euro (ie against the Deutschmark).

Otherwise they face years of grinding poverty whereas escape from the Euro might cause short-term pain - in exchange for long-term gain.
Posted by nigel hastilow at 10:10 am