A song for Europe

As Britain prepares for this year’s Euro-elections, a new novel looks into the murky, secret origins of the European super-state.

With its origins in the chaos of Europe after the Second World War, the EU’s founding fathers were determined such devastation must never happen again.
But when it came to propaganda and brainwashing, did they learn from the Nazis?
Ex-MP Acton Trussell investigates the apparently straightforward murder of the country’s most famous headmasters.
It quickly becomes clear the murder was not the result of a burglary-gone-wrong.
As he delves into the secret past of the man 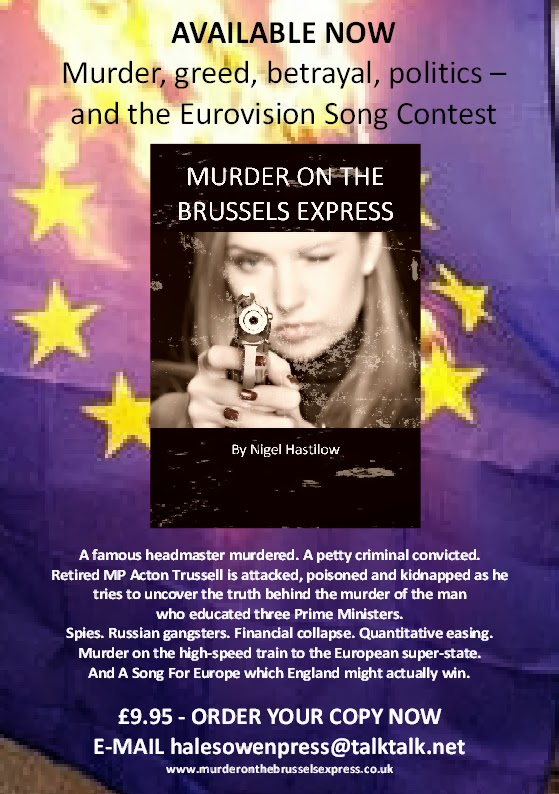 who was responsible for the education of no fewer than three Prime Ministers, he discovers more than he bargained for.
The story follows Trussell’s investigations to London, Brussels, Amsterdam, Paris and – finally – to Avignon.
He is only kept alive by the good offices of a “friend” but even then his life is increasingly in danger as he stumbles on a conspiracy to destroy the Bank of England, rob Britain of its independence and hand the profits to Russian gangsters.
Meanwhile his daughter is trying to win the Eurovision Song Contest for England.
Author Nigel Hastilow says: ‘With elections to the European Parliament taking place in 2014, it is worth asking ourselves how the powers-that-be managed to create what is now more or less a single super-state.
‘It may have developed by accident but the more you consider the EU’s slow, determined and inexorable progress towards “ever-closer union”, the more likely it seems we have allowed a super-state to be created by stealth.
‘Is it possible that a group of determined people, with the single goal of accumulating most of Europe’s power and wealth, could really have succeeded where tanks and bombs failed?
‘This novel considers these possibilities as its hero, Acton Trussell, tries to prove the innocence of a man convicted of murder.
‘My novel “Murder on the Brussels Express” is a political thriller. But you can tell it’s fiction because it also includes an English band which thinks it is in with a reasonable chance of winning the Eurovision Song Contest and we all know that’s never going to happen again.’


Murder on the Brussels Express is available in paperback edition (£9.95) from Halesowen Press, or Kindle edition (£5.00) on www.amazon.com.


For more information, e-mail halesowenpress@talktalk.net
or go to www.murderonthebrusselsexpress.co.uk
Posted by nigel hastilow at 1:41 pm No comments: