The Boris, Piers and Jeremy of the 17th century 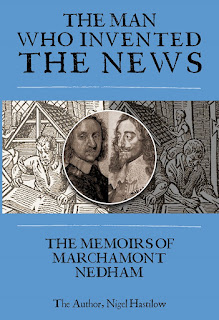 Just 380 years after the outbreak of the English Civil War on August 22, 1642, the memoirs of the era’s most notorious, controversial and successful journalist are finally published.

Marchamont Nedham, who was just 22 at the outbreak of war, became a newspaper pioneer, the most successful publisher of the era.

In an era when “freedom of speech” did not exist, he was jailed three times, threatened twice with execution and once fled the country fearing he would be hung, drawn and quartered.

·        Condemning the politicians who executed the King;

Nedham’s memoirs are closely based on the 17th century newspaperman’s career.

In an unrestrained age, when invective was as rife in print as it is on Twitter today, Nedham was a master of the well-aimed insult.

He first wrote a newspaper in support of Parliament against the King; then a second backing the King against Parliament; his third was the official newspaper of the Cromwell dictatorship. Finally, he was employed writing for Charles II against the King’s political enemies.

In the 17th century, newspapers were in their infancy. Nedham was a pioneer – the most successful journalist and editor of the era – yet he is relatively unknown today.

Historians accuse Nedham of inconsistency but they disregard his greater achievement – to write, print and distribute three successive weekly news-sheets over a turbulent period of 18 years from the outbreak of the civil war in 1642 to the restoration in 1660.

The desire for news was insatiable and literacy was surprisingly widespread with about half the population of London able to read.

News-books were not sold in vast numbers (1,000 copies a week costing one penny each was about average) but they were widely shared and read aloud in many places, especially among the armies involved in the war. Politicians tried many times to rein in the press. They wanted to control what was being reported and, at the same time, they wanted to use the press for their own ends.

Marchamont Nedham’s writings on constitutional and political issues helped inspire the American revolution. Yet because his allegiances and his opinions shifted according to who he was working for, he has been dismissed by historians as a contemptible “triple-turncoat” of no great significance.

I would contend that there is nothing wrong with being a pen for hire and, in navigating his way through the deep, dark currents of the English Civil War, he not only kept his head above water but laid many of the foundations of journalism that we take for granted today. A martyr in the cause of free speech – jailed three times and fleeing for his life once – he was a pioneer whose importance to journalism should not remain as obscure as it has done for centuries.

Marchamont Nedham, who died of a heart attack in a London coffee house in 1678 aged 58, was belligerent to the end. His last publication was a robust attack on the French who, he said, were “those monkeys of mankind”.

I have written his autobiography for him, taking the known facts about Nedham’s career and trying to stitch them together by filling in the gaps.

Posted by nigel hastilow at 5:37 pm No comments: