Close of Play: a new novel about property developers and village cricket...

Posted by nigel hastilow at 4:48 pm No comments: 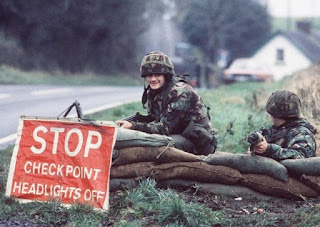 When he announced his new, repressive measures aimed at frightening us into submission, Boris Johnson thanked the first ministers of Scotland, Wales and Northern Ireland for their ‘collaboration’.

This is a significant word. ‘Collaborator’ has an infamous ring to it. Mostly it brings to mind Vichy France and the Governments of other countries willing to work with the Nazis during World War Two.

And I suspect, without meaning to, Boris Johnson was subliminally thinking of Nazi totalitarianism when he imposed his latest nationwide lockdown, promising bigger fines for misdemeanours and threatening to call in the army to police the streets.

It won’t be long before your average shopping centre looks like Belfast in the 1970s with armoured cars on street corners and soldiers toting machine guns glaring with hostility at every passer-by (not to mention probably shooting on the spot anyone who dares to chat with an acquaintance let alone fails to wear a face mask).

To what purpose this novel coronavirus clampdown? To save us from ourselves, of course. We’ve been eating out to help out; we’ve been down the pub; we’ve even taken a brief holiday, probably in this country and certainly after self-isolating before, during and afterwards.

But it seems the supposed ‘rule of six’ imposed only a week ago was, within days, apparently ‘not working’, at least according to the demented statistic-peddlers Boris put before the nation to scare the children.

Chris Whitty and his sidekick Sir Patrick Vallance, the Tweedledee and Tweedledum of the coronavirus pandemic, displayed a bogus graph claiming that, without drastic action, the spread of the virus would double every seven days. By mid-October, the total would reach 50,000, they claimed.

They did admit this graph and its scary number was ‘not a prediction’. But it was misleading, dangerous and irresponsible for them to concentrate on a nonsensical statistic which, if we were to give them any credit, could be seen as a ‘worst-case scenario’.

Sadly, throughout this pandemic, the first casualty has been the truth. Nobody is prepared to admit they really do not know what might happen in any given situation. They bandy about numbers like the 50,000 - or, more terrifying still, the 500,000 originally doomed to die unless lockdown was imposed in March - without real evidence to support their claims.

Yet the health doom-mongers and their captive politicians, led by Mr Johnson who is half the man he used to be, are allowed to run wild.

They have been so successful in terrifying us all that, in some polls at least, a majority of the population even now thinks the Government has not gone far enough in protecting us.

We have a Government determined to sacrifice everything on the altar of the pandemic. The economy is shot to pieces. Much of it will never recover. Shops, pubs, clubs, restaurants, theatres, airlines, even football clubs - some of them will never re-open. Any business or pastime where people get together and socialise is doomed to decay and, in many cases, death.

Meanwhile the National Health Service has abandoned the idea of caring for the nation’s health. You can’t see a GP. You can’t get a flu jab if you’re under 65. You daren’t bother A&E. You can’t get early warning of cancer or many other fatal diseases.

Hideously, you are now much more likely to die at home of some treatable but ignored condition than you are to catch, let alone die from, coronavirus.

In one week earlier this month, according to the Office for National Statistics, one of the less untrustworthy sources of numbers, 99 people died of Covid-19 while a needless 830 died at home of other causes.

The virus panic, not the pandemic itself, is killing us and killing our economy and hardly a voice is raised to question what’s going on let alone protest.

Take, as a small example, the 10pm curfew on pubs. Even the Government itself admits there is no evidence this will do any good, reduce the rate of infection or save a single life. Yet we accept the decision with scarcely a murmur.

The totalitarian imposition of what is almost martial law across the United Kingdom - thanks to the ‘collaboration’ of the First Ministers - is taking place with the supine, unquestioning acquiescence of our politicians.

The long list of Government failings - from the shortage of PPE at the outset to the collapse of the virus testing system under Dido Harding, the staggeringly inept wife of a Tory MP who was at university with David Cameron - makes it impossible to believe a word they tell us any more.

We cannot believe what we are told. We watch with incredulity at the imposition of curfews, house-arrest, swingeing fines and a new authoritarianism we have been browbeaten into believing is for our own good.

We need fewer collaborators. We must question every statement and assertion. We must trust nobody in any position of power. They are lying to us.

Posted by nigel hastilow at 11:43 am No comments:

I've just written a piece for a cricket blog. Read it here: https://cricket-cup.blogspot.com/2020/09/played-and-missed.html

Posted by nigel hastilow at 2:46 pm No comments:

Posted by nigel hastilow at 10:42 am No comments:

We are all Nimbys now

You can read a back issue of the ‘Sunday Times‘ or you can read ‘Close of Play‘ to see how it happens. 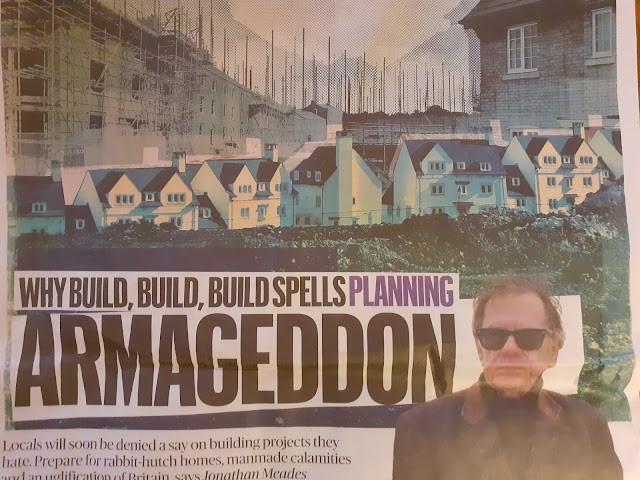 'Close of Play', a book about plans to build on a village cricket ground, explores what happens when the planning process goes haywire and local opinion counts for nothing.

BOOK OUT NOW ON KINDLE AND IN PAPERBACK

Posted by nigel hastilow at 7:56 pm No comments: 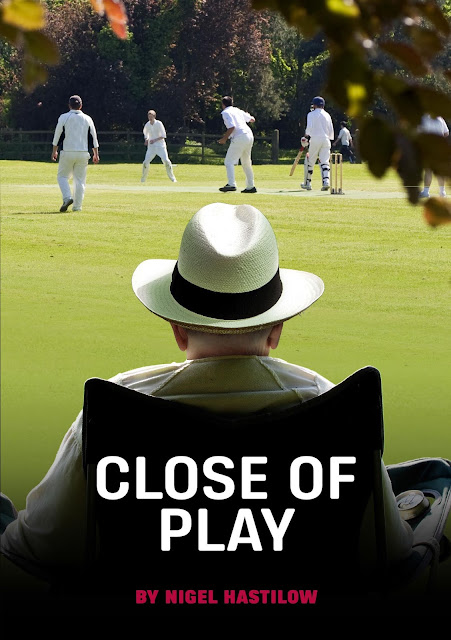 I've just finished a new novel about village cricket. The lord of the manor wants to build houses all over the cricket ground and the club's members are divided over whether to sell up. There's only one way to make the decision: a Twenty20 cricket match. There can only be one winnner.
Posted by nigel hastilow at 2:57 pm No comments:

What can I do about it?

What have they said?

‘You can't use Facebook because your account, or activity on it, didn't follow our Community Standards. We have already reviewed this decision and it can't be reversed. To learn more about the reasons why we disable accounts visit the Community Standards.’

Can I talk to them and ask for an explanation?

A bit. It’s not nice being banned especially when you genuinely do not have a first clue what your transgression might have been.

A bit. But as I rarely used it, I don’t suppose it matters all that much.

Posted by nigel hastilow at 3:34 pm No comments: