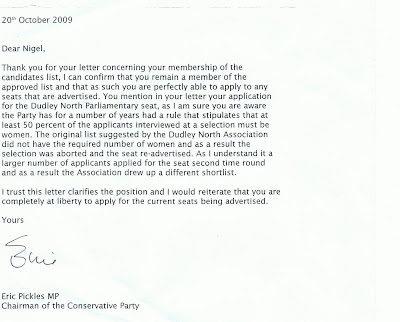 If David Cameron’s “localism” policy does not apply to his own constituency parties, how can we have any faith in its wider application under a Conservative Government?

The central control of candidate selection, which has become tougher as the General Election approaches and various “safe” seats are vacated by their MPs, gives the lie to localism.

The experience of one constituency’s selection committee is a fine example of how the party bullies, browbeats and berates its volunteers into submission.

A four-man CCHQ team led by party chairman Eric Pickles and including vice chairman John Maples, who is in charge of the candidates’ committee, met the four men and two women from South Staffordshire on Thursday.

The party chairman, whose attitude was described as highly unpleasant from the start, questioned every name on the South Staffordshire shortlist of six.

Starting with the mandatory three women, Mr Pickles demanded reasons for every selection and offered up his own substitutes.

After some debate, the first five names were agreed without any change to the original list. At this point, Mr Pickles tried to close the meeting. “Have we finished, then?” he asked.

There was a long pause before it was pointed out to him that one other name was on the list. “You don’t want him,” Mr Pickles immediately told the association representatives.

There followed a long argument. The CCHQ team (untruly) claimed the controversial candidate had even threatened to sue the party at one point.

The locals went through several reasons why they wanted this candidate included. They even drew Mr Pickles’s attention to a letter he had recently sent the candidate assuring him he was still on the list of approved candidates and he was free to apply for any seat where there was a vacancy.

Mr Pickles ignored this completely, insisting that the person the locals wanted to invite for an interview was simply unacceptable.

Did they really want someone so controversial for their sleepy backwater? he kept asking.

The two sides reached stalemate. The locals called for a 15-minute adjournment to discuss the situation alone.

At this point, they agreed to give way. Most of them had never been to CCHQ before, they had never met the party chairman before, they were intimidated into submission. They reluctantly agreed to drop their preferred candidate.

How do I know all this? Because I was that candidate. I had personal assurances from at least three of the selection committee that they were determined to give me the opportunity of an interview.

Since I resigned as the candidate for Halesowen and Rowley Regis following a storm in a teacup over an article I wrote on immigration, I have stayed loyal to the Conservative Party.

John Maples, who has in the past described himself as a friend and told me I would make an excellent MP, advised me to hang on in there and in time I would be welcomed back.

Mr Pickles made it known in the summer that he would welcome it if I applied for the vacant seat of Dudley North. I did so and was originally shortlisted and given a date for interview.

Two days later the selection procedure was suspended. I had to reapply and this time I wasn’t successful. Was my name vetoed by CCHQ?

I wrote to Mr Pickles who replied that I was still on the candidates’ list and I was entitled to apply. Only now do I realise how disingenuous this was – you can apply any time you like but you won’t get anywhere.

John Maples’ role is particularly obnoxious. My wife works in his constituency office (actually, she used to work there but resigned in disgust). He has told me more than once that he would like to see me find a seat and that the Commons needs people like me.

One word from him could have changed the outcome but, throughout the whole meeting, he said little or nothing, certainly nothing supportive of his supposed friend.

There are plenty of Conservatives who think I am beyond the Pale because of the controversy surrounding my observation, in 2007, that Enoch Powell was right to warn that uncontrolled immigration was changing the country dramatically.

There are plenty more, however, who realise the truth of what I said, note that the view is now more or less commonplace, and believe a few MPs who have some independence of mind would be quite a good idea in the next Parliament.

Clearly, the balance of opinion is not going to be put to the test by offering members in any constituency an opportunity to decide whether or not I should be their MP.

Instead, Mr Pickles, Mr Maples and their apparatchiks prefer to ride roughshod over such concepts as local democracy.

It is a disillusioning process. Those harangued by the party chairman came away shocked at their treatment and dismayed by the heirarchy’s apparent contempt for their own most active volunteer members.

It’s tough luck for me, of course. But it’s even worse for the future of the Conservative Party. Why bother to become a member when CCHQ’s version of localism is to show its contempt for the locals?

The most glaring example of this is, of course, John Maples’s own resignation from Stratford on Avon, which came so late he deprived his local association of an opportunity to advertise the seat and choose its own short-list of candidates.

If the party’s own members can’t trust its leaders to behave honourably, why should the voters?

It's interesting to note, by the way, that one of the six who made the shortlist is a strong Europhile who has in the past campaigned to scrap the pound.

An e-mail received from a friend: Re;ConHome - you did not embarrass the Party - Caroline Spelman and the other weak cowards who hounded you for speaking 100% fact and common sense instead of fighting the PC-biased media embarrassed the Party.
Incidentally, friends tell me they tried to post in support of you on ConHome and either their email addresses are being blocked or the site is restricting positive comments. They could all have dodgy PCs but I doubt it!
Looking at the news any day in the last week, it is 100% and undeniably correct that Enoch Powell was prescient beyond belief! The vast majority of the voters would agree with you.
Posted by nigel hastilow at 9:00 am

Nigel, I sympathise with you, I really do. I always thought politics was about passion and belief. Maybe it was in the past - but not now. Mainstream politics has become nothing more than a homogenised product of mediocrity -orchestrated by control freaks, focus groups, the sofa-elite and in the case of Mr Pickles, overweight, over-bearing and over-promoted bullies. As a direct result of Tony Blair's personality cult and his landslide victory in 1997, Westminster has become such a grey and intellectually drab environment as all 3 mainstream parties compete to create their faux-dynamic, non-controversial touchy-feely, I feel your pain, right on with the kids, teams...

I always make a point of watching PMQs - and especially the old has-been that is Dennis ‘soporific’ Skinner. He sits, a rebel without any cause at all, a comedic husk of a man. This supposed beast, the man who is apparently one of the baddest of bad boys of the chamber sort of sums it all up as he sits there moribund, as reactionary as a dead sheep while Boss Brown spouts his lies and inaccuracies.

The main parties don't want individuals or free thinkers, they want yes-people - there to reflect their idea of Britain's constituent make-up.

No, neither can I.

This former lifelong Labour voter of over 30 years gave up voting for them (or indeed any of the other two) when I discovered England didn't qualify for national devolution because it might upset the union (a price worth paying, apparently). I have absolutely no trust in any of the main parties. Well, why would I when in ALL THREE 2005 main party general election manifestoes was a cast iron guarantee to hold a referendum on the Lisbon Treaty.

That’s 'cast iron', as in an immovable and uncompromising promise to the people of Britain to hold a referendum - and yet, because we just might not have given the correct answer, the answer as demanded by Dave, Gordy and Nick, we weren’t allowed to be trusted to have a vote.....

You're better off out of it Nigel.

Nigel, I do not sympathise with you. How you can expect to be forced to resign 2 years ago and then get selected in a safe seat. Talk about naive matey!
Your political career was dead in the water the day you associated yourself with those infamous remarks of Enoch Powell.
Get over it!

have you evert thought Nigel, the reason they might not want you is because they knew you would do something like this? you didnt get selected, oh well, neither did many others i presume so get over it. a conservative government is far better than the labour dictatorship we are ruled by now so do your bit and continue to support the party. i have read your book and i agree you could make a fine MP, but if you were to throw your teddy out the pram at something more serious than this it could cause some serious damage to the party and therefore that would make you a risk.

Nigel, After voting Tory since 1970 I gave up with them when John Major signed the Maastricht Treaty, UKIP is my political home now.

There will be a nice warm, cosy constituency waiting for you if you joined UKIP too, and lots of people you would get on well with. Give it a thought.

"It’s tough luck for me, of course. But it’s even worse for the future of the Conservative Party."

Wow, modest to a fault.