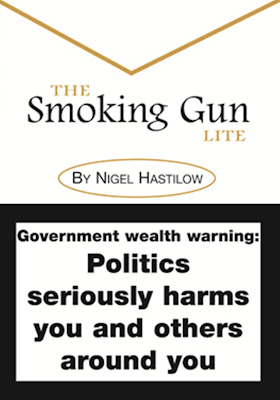 In "no-smoking Britain" the Coalition Government has stubbed out cigarettes once and for all. But it's politics as usual.

So why is MP Acton Trussell being forced to resign? Who stitched him up? Why does the Prime Minister want lipstick lesbian Lucy Loxley in Parliament? Will the Coalition’s ‘fixer’ Compton Dundon help Clifford Chambers slither up the greasy pole? Who planted the smoking gun?

A romp through the corridors of power and the streets of a Midland town as the Coalition Government faces a crucial by-election in the safe seat of Barset.

As old loyalties are tested and new alliances formed, is this low politics, high farce - or both?

My new novel is coming soon.
Posted by nigel hastilow at 7:50 pm