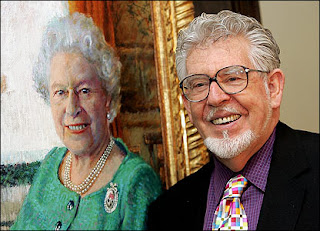 Rolf may be an Australian but that didn’t prevent them giving Edna Everage a Damehood so why not the man who gave the world the Stylophone, the wobble board and the digeridoo?

Rolf is an excellent artist – and at least you can tell what it is he’s painted – and he’s never flogged a decomposing dingo in formaldehyde for several millions and called it “Art”.

More to the point, Rolf is responsible for some of the modern classics which should be in every household’s collection of all-time greats.

Consider, for instance, “Tie Me Kangaroo Down” with The Beatles
or the famous “Waltzing Matilda”.

Then there’s the definitive version of “Stairway to Heaven”
as well as the world’s first ambient music track, “Sun Arise”,

He may be an Aussie but let's not hold that against him. Give this man a Knighthood now.
Posted by nigel hastilow at 11:55 am