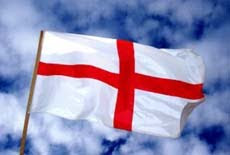 When Sajid Javid stood for selection as the Conservative candidate for Bromsgrove a few weeks ago, he was asked what legislation he would bring in if he had the chance.

Mr Javid, a bus-driver’s son who went on to become a successful banker (should we hold that against him?), announced he would bring in a Bill to make St George’s Day a Bank Holiday.

That went down well with the Tory ladies whose votes would decide who took over from Julie Kirkbride as MP for what is probably even now a safe seat.

This may have been political opportunism on Mr Javid’s part. As a Muslim, he would have known that something patriotically English would help win over any sceptics.

Even so, it is evidence that the desire to celebrate English patriotism is gathering pace. The Welsh, the Irish and the Scots all make a big deal about their patron saints but, until recently, the English have been reluctant to celebrate St George.

That’s partly because the flag of St George is closely associated with football hooligans and right-wing nutters. Yet there is a growing sense that England is losing its unique identity in the multi-cultural melee that is Britain today.

A week after St George’s Day, we get the May Day Bank Holiday. This was introduced by the Labour Government in 1978 to mark International Workers’ Day. In Moscow they still parade tanks and rockets past grey old men in the Kremlin.

Why do we get a day off to celebrate Socialism around the world when poor old St George is almost universally ignored?

Our rulers – civil servants, politicians, the BBC and other members of the New Establishment – hate the very idea that the English should assert their own nationalism or celebrate the glories of our nation.

To them, the words “English” and “racist” are synonymous. Only on the sports-fields of the world is it politically correct to celebrate English patriotism.

Yet there is an overwhelming desire among the people who live in this country to assert our independence and individuality.

A new ICM poll by Power2010 shows growing support for an English parliament and English votes on English laws.

This is especially important if, as now seems highly likely, we end up with a hung parliament after the General Election.

The Scottish and Welsh Nationalists are desperate for such an outcome because they think they can squeeze a cobbled-together Westminster Government into giving even more concessions to their parts of the United Kingdom.

That would further entrench the unfairness and imbalance between England and the other three – much smaller – parts of the UK.

Already the Scots enjoy all sorts of concessions denied to England and yet subsidised by the taxpayers of England – from free prescriptions to free university places for every student in Europe except anyone from England.

If the English were invited to vote on Scottish independence, we might well come down in favour of it.

In the meantime, the least we can expect is that Scottish and Welsh MPs, whose devolved governments make all the decisions in their own countries, must be denied the right to change the laws of England.

And when we finally get our independence, we should celebrate by making St George’s Day a Bank Holiday.

The English may well be a mongrel race but this is a green and pleasant land and, despite all its many drawbacks, we should be free to express our pride and affection for it.

What better than to ditch international socialism and give St George his rightful place in the calendar?

St George is on the march. Across the country, people are organising parades and events in his honour – though last year Sandwell tried to ban theirs on the grounds that it would be taken over by racists.

Actually, it is the critics of “the English” who are the real racists. We are constantly insulted by our near neighbours and we’re expected to endure it in silence.

We must be free to assert our own nationality in our own country, otherwise “God help Harry, England and St George”.
Posted by nigel hastilow at 11:23 pm